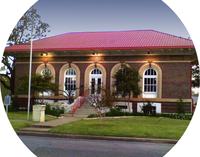 In the 1680s when the Spanish began to travel into Texas, they followed already existing networks of American Indian trails. Domingo Teran de los Rios, first governor of the province of the Tejas, came in 1691 to establish missions among the Tejas Indians of East Texas and to build presidios or military garrisons against French encroachment. By the 19th century these same trails, now called El Camino Real, or The Royal Road, carried Anglo immigrants from the U.S. to settle in Texas.

To track this trail, the Texas Legislature in 1915 commissioned professional surveyor V.N. Zively to survey and mark the route of the so-called Old San Antonio Road (OSR). Today familiar pink granite markers with the lettering, "EL CAMINO REAL", salute travelers along the Zively route that marks the boundary between Robertson County and its southern neighbor, Brazos County.

Then, to recognize the 300th anniversary of the state's most significant trans-Texas road, the State Legislature in 1991 directed TxDOT "to identify the present disposition of the historic trail," to develop a preservation plan for management of the OSR, and then to prepare a report. In summary, the OSR project staff found that the "Old San Antonio Road", contrary to popular perception, consisted not of a single route, but actually included no less than five different main routes meandering at various times in a wide corridor across Texas.

To identify these roads in the corridor through Robertson County the "post-1790 segment between San Antonio and Nacogdoches"* is designated the Camino Arriba or signed "OSR" while the 100-year older road which crossed the Brazos River at Burnitt Shoals near FM 979 and passed from roughly Calvert to Franklin to the Navasota River is referred to as Camino de los Tejas.

From the early Spanish crossing at Burnitt Shoals into Robertson County, the 1991 TxDOT report says that the trail ". . . follows State Highway 6 to Calvert and from there along FM 1644 east to Franklin. It continues along US 79 eastward to the Missouri Pacific Railroad at Alum Creek, crossing the Navasota River where the current railroad bridge is located."* (p. 188) The Robertson County Carnegie Library sits at the junction of FM1644 and US 79.

Some individuals point to evidence of the trail continuing down FM 979 from Calvert to cross the Navasota instead at Sycamore Crossing or Grayson Crossing into Leon County. This latter route would have offered a flatter passage without creeks to cross through the prairie land and without the encumbrance of the Post Oak Savannah. Not only did old maps from the Spanish to Zebulon Pike acknowledge a route very similar to today's FM979, the first land grants all lined up with this road.

Ultimately, the current study has identified at least five variants of El Camino Real as it passes from the Rio Grande into East Texas. "At any given time," reports TxDOT archeologist A. Joachim McGraw, "a single route was employed by travelers and its choice depended on seasons, natural conditions, and the presence of hostile Indians." Through partnerships with local landowners, chambers of commerce, county historic commissions, and elected officials, the National Park Service is working towards eventually identifying all route segments and posting official signage.

For more information, visit www.elcaminorealdelostejas.org and view the interactive map. Zoom in to follow the trail across Robertson County.

*A Texas Legacy The Old San Antonio Road and the Caminos Reales, A Tricentennial History, 1691-1991 ; Edited by A. Joachim McGraw, John W. Clark, Jr., and Elizabeth A. Robbins; Texas Department of Transportation, January 1991.